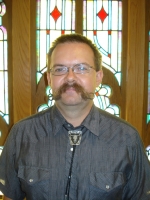 Choir Director
Josh and Nancy Peterson began their professional church music careers over 20 years ago. Josh has his Master’s degree in Music from the University of Nebraska- Lincoln, where he was a featured vocal soloist on the first concert to be broadcast live over the internet. He is a bugler with Bugles Across America, an organization that provides live bugle playing of TAPS at military funerals.
Nancy holds her Doctor of Musical Arts degree in organ performance from the University of Nebraska- Lincoln. As an organist, she has been awarded several honors, including being named the winner of two national organ competitions. She directs two choirs for the St. Clair County Christian Home Educators group.
Together Josh and Nancy have served a number of churches and denominations as music directors. They have conducted adult, youth, and children’s choirs, handbell and handchime choirs, soloists, ensembles, barbershop quartets, brass choirs, bands, and orchestras. They have run handbell clinics, performed in many venues and locations, and hosted foreign music groups. They have arranged works for choirs and instrumentalists, commissioned professional compositions, and designed music rooms and organs.
On a more personal note, they enjoy hiking, gardening, reading and having family adventures. They home-educate their nine children (oldest is now married), and love to rehab their century-old house. Their family forms the Peterson Family Singers, which has performed small gigs throughout the country. They are the Coordinators of the St. Clair County Christian Home Educators, and Josh is a remodeling contractor and owns Uncle Moustache Home Improvements.